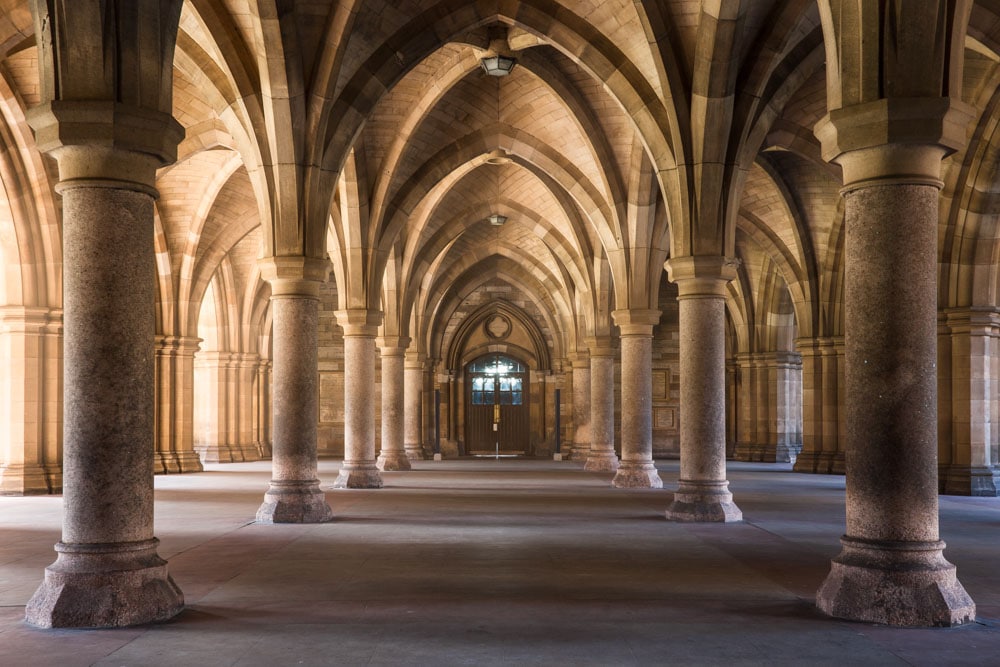 This is one of the earlier "HDR" images I’ve created. Also, one of my all time favorites.

It’s the cloisters at the University of Glasgow in Scotland - my Alma Mater. It has to be one of the most beautiful building structure I’ve ever seen. The gorgeous Gothic style architecture will never ceased to amaze me.

I first posted this image on my Flickr in 2009. You can check it out here.

The image was created using five bracketed exposures. I used Photomatix back then to merge into HDR and tone-mapping. I can’t remember what else I did but looking at it, I must have added Orton effect to make the highlights glow.

Why have I decided to blog about an “old” image I took nearly 10 years ago?

There are several reasons.

One of the reasons was that I didn’t have a platform to talk about it before. Although I could have written a long paragraph in the description box on Flickr, but I didn’t think anyone would actually read it.

But the main reason is this:

I wanted to see how different the image would look, considered my post-processing skills are better now and style has changed over the years.

The Cloisters at Glasgow University​​​​

The university campus covers a large area in the west end of Glasgow. The main building itself, however, is located on top of a hill overlooking Kelvingrove Art Gallery and the rest of the west end.

It’s rectangular in shape with the cloisters in the middle dividing the entire building into two sections. You’ll have to pass through the cloisters to get from one end to another.

My approach in photography back then was very different. Apart from the composition, I didn’t really think about anything else. I didn’t understand light and I didn’t know how to use histogram.

I used to bracket almost everything into HDR, this was no exception. Looking at the Raw images, all apart from +2EV were underexposed. That just shows how terrible I was before.

How I Post-Process The Image​​​​ 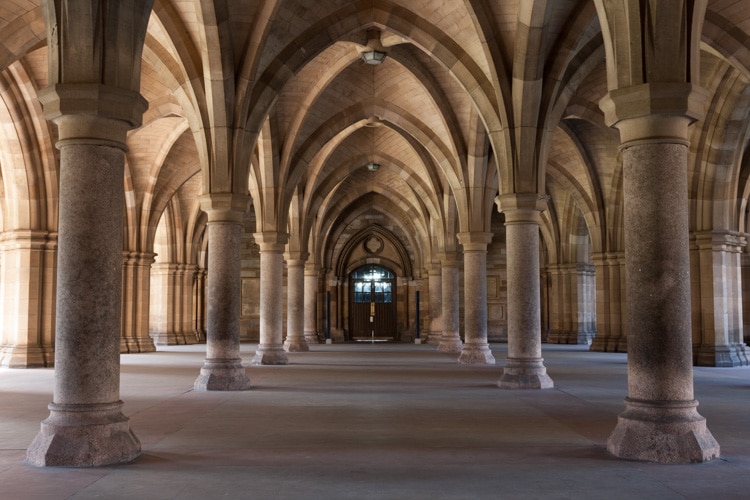 The Raw image without any corrections or adjustments

The Raw images were in the archive folder because I used to post-process with Apple Aperture. I didn’t import all my archive into Lightroom catalogue as I find it tedious to tidy everything again.

After digging out the files, I opened them all in Photoshop. To my surprise, the histogram for +2EV was mainly midtones and shadows. It didn’t really need be processed into HDR! 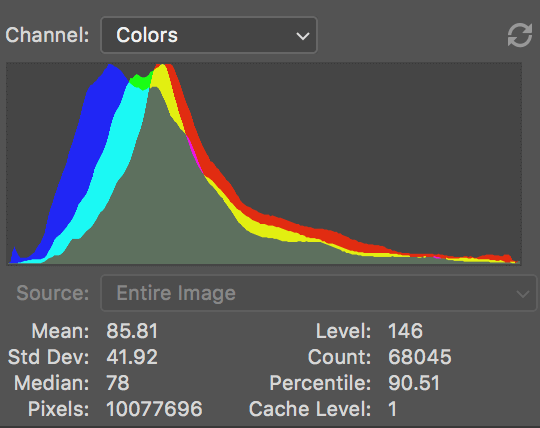 Once I've applied the basic corrections, it was looking pretty good already.

As I studied the Raw image, I noticed the main light was coming from the left, through the entrance of the cloisters. This created beautiful highlights and shadows in the arches, emphasizing the curves in the cloisters. I wanted this to be more prominent because it complements the visual design of the composition.

I emphasized the highlights and shadows by dodging and burning. As I was doing it, I found it difficult to dodge and burn accurately due to the complexity of the arches.

To make life easier, I used luminosity mask. I chose a bright mask and applied it to the dodge and burn layer. This way, I could dodge the highlights precisely without much effort. Then, I did the same for the shadows by selecting a dark mask on a second dodge and burn layer.

I also wanted to make the source of light more prominent. Few techniques came to my mind but I decided to go with the easiest. 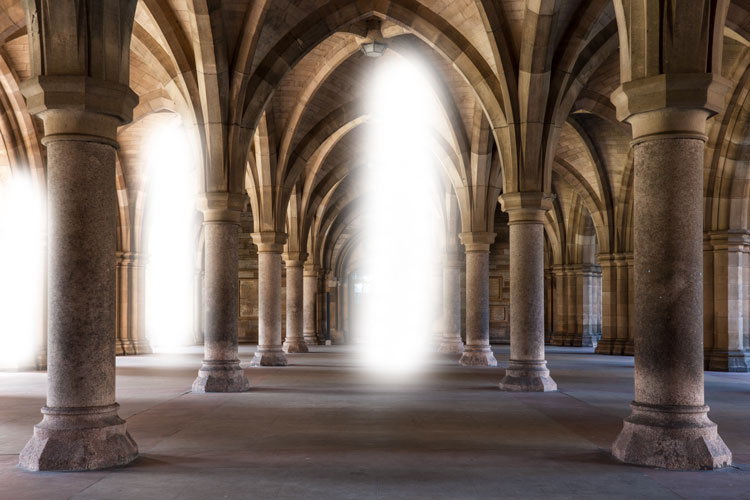 As you can see in the image above, I painted three white column with the Brush tool. Then, I blurred it with Radial blur several times followed by Gaussian blur. Lastly, I masked out areas that I feel shouldn’t have light to make the effect look more realistic. 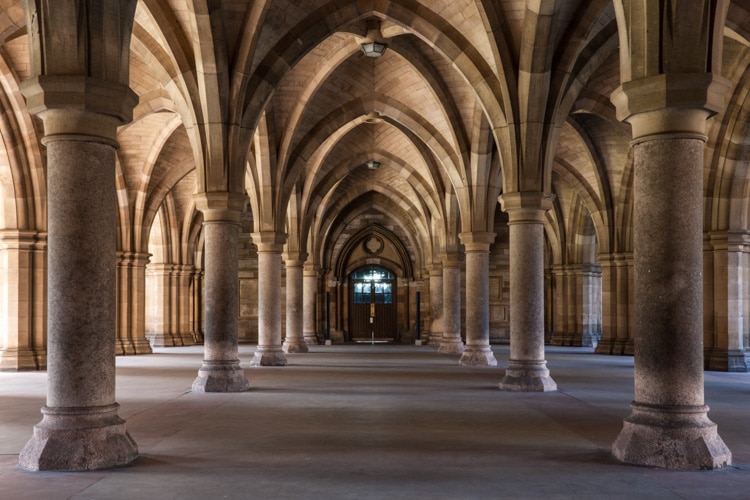 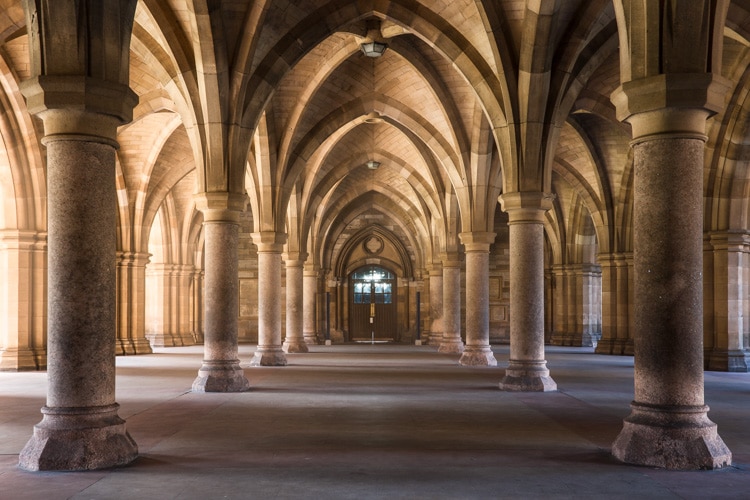 Before and after adding extra light to accentuate the effect.

But now there was one problem. The image looked washout because of the “new light”. Instead of an S-curve to bump up the contrast, I added a tinge of yellow to the light by clipping a Hue/Saturation layer to the light layer.

This some how made the light a little fuzzy, kind of like the Orton effect but very subtle and I like it.

My Photoshop Layers Panel for this image

I saved the image at this point and imported it to Lightroom for fine adjustments such as Clarity, Curves, HSL and Sharpening. The effect of the light had diminished at this point because of the additional adjustments,  so I placed a large Radial filter on the left and increased the Exposure to make it bright again.

Brightening up with Radial filter in Lightroom

I Couldn’t Believe The Horror

Now that I have two versions of the image - the old and the new one, I couldn't help but put them side by side to compare. 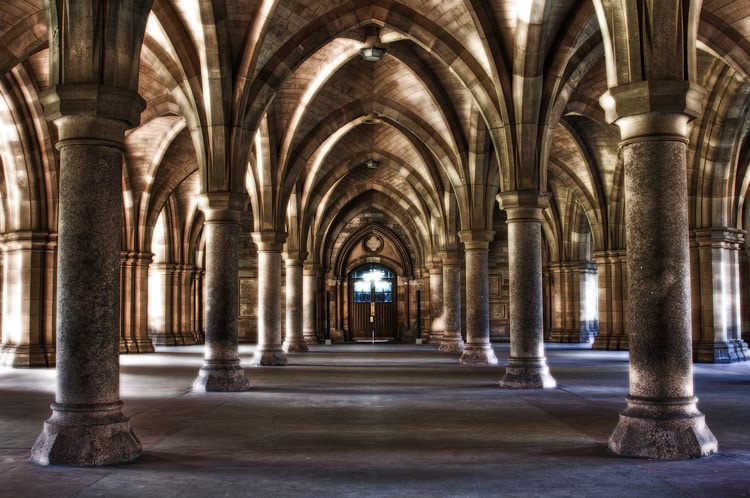 Comparing the original version (before) and the redo version (after).

To my horror, the older version now looked like something I sweared I’ll never do it again - grungy, overcooked HDR!

Honestly, I couldn't believe it initially. I thought there was something wrong with the image (maybe color space?). I login to my Flickr to see what I've posted before...

It’s amazing how my perception changed so quickly. Just a minute ago, I was still feeling proud of the older version. But now, I just want to delete it forever.

But I won’t, just like all my other older images. I keep them where they are to remind me the darker days and how much I’ve moved on.

Your Archive Is Your Goldmine

So what happens when you reprocess an old image you've done years ago?

You get insight to yourself, see things from a different perspective and in my case, revamped an old image and surprised the hell out of myself.

It also got me thinking...

There are thousands of images in my archive which I've locked away, a bit like an old cookie box being left in the attic full of childhood pictures.

I have only found one today and there are probably many more waiting to be re-discovered.

It's the same for you. You should certainly consider checking out your archive, reprocessing some old images and you might even unearth images you didn't think were worth processing. Who knows what's awaiting for you!

Your archive is essentially a treasure chest sitting some where deep in your hard drive.

Now, time to do some digging!