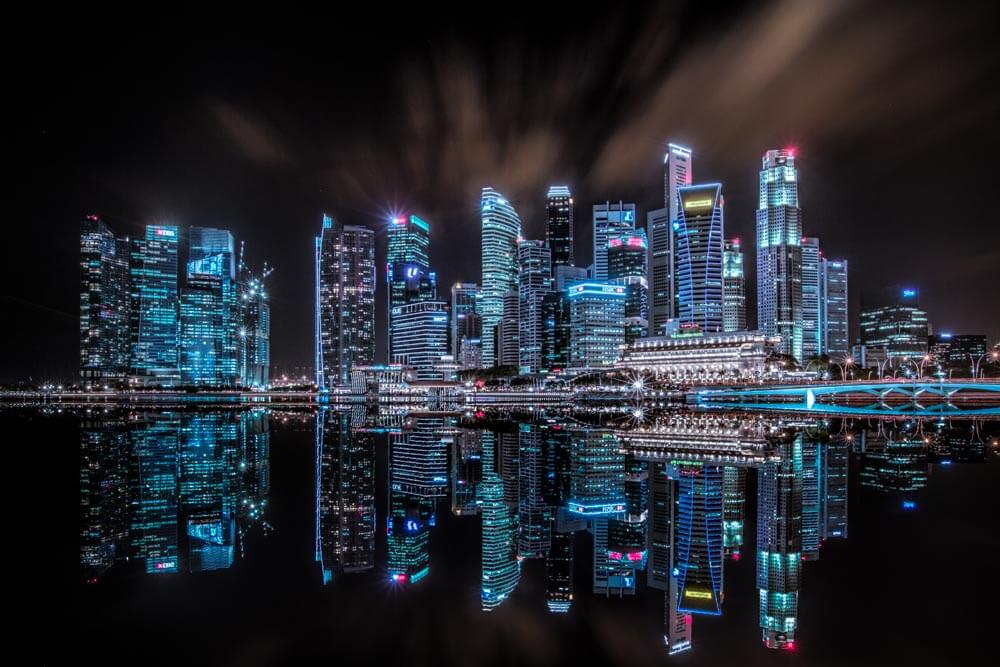 Marina Bay, Singapore in an effect inspired by the movie Tron

This is one of my favourite images to date. Although, strictly speaking, it’s a composite - my interpretation of the scene rather than actuality.

What is your interpretation of photography?

Does an image always have to be real, a reflection of what you saw?

I had wondered that question for a while until I came across an article that explains the three types of photographs:

Maybe you knew this a long time ago but it was an epiphany for me. Before that I thought I had been creating junky images that stuck between the realms of reality and fantasy.

I took this image when I was visiting Singapore. The execution of the shot was planned but finding the scene was by luck.

I had plans to do some shooting one evening so I went out with my gear. The weather forecast had predicted intermittent showers throughout the day, which was fine except I didn’t know when these “intermittent” showers would be.

There’s one thing I’m sure many landscape photographers can relate to. Whenever we go out with our camera, the weather would play up and not give us what we want.

My hope was to catch the sunset but unfortunately down came the pouring rain in the evening. Needless to say, I was disappointed, for one valid reason - I only had one night to shoot while I was there.

Not knowing if I would be able to get any photos that night and the fact that I needed dinner, I went into a restaurant for shelter and food. I was very hopeful the sky might miraculously clear up so I could get some work done.

The sky had turned dark. I couldn’t quite work out if the weather had cleared up from inside the restaurant. But I had to leave anyway because there wasn’t anything else for me to do.

To my delight, the weather was finally in my favor!

I knew where I was but didn’t know what was there to shoot. Stepping out, I saw people walking towards a particular direction. So I followed them...

That led me to an area of Marina Bay overlooking the financial district - concrete jungle lit by night lights. Under the clear night sky, the view was simply stunning!

If you have taken images of cityscape at night before, you would know the bright lights are always blown out in the image. Typically, lights from signboards, street lights, etc. This is how most people shoot a night cityscape.

What they don’t realize is that night cityscape is a high dynamic range scene. The artificial lights illuminating the buildings are often so bright that it stretches the dynamic range of the scene.

When you meter the scene in matrix metering mode, it takes a general exposure of the scene. Because it’s a night scene, the camera thinks it needs to increase the exposure so the image can be brighter. What this does is placing the bright lights to the far right of the histogram - highlights clipping.

A Different Approach to Bracketing Exposures at Night

The principles are the same.

You probably just need more than just three exposures. There's also a good chance that you may have to bracket manually. 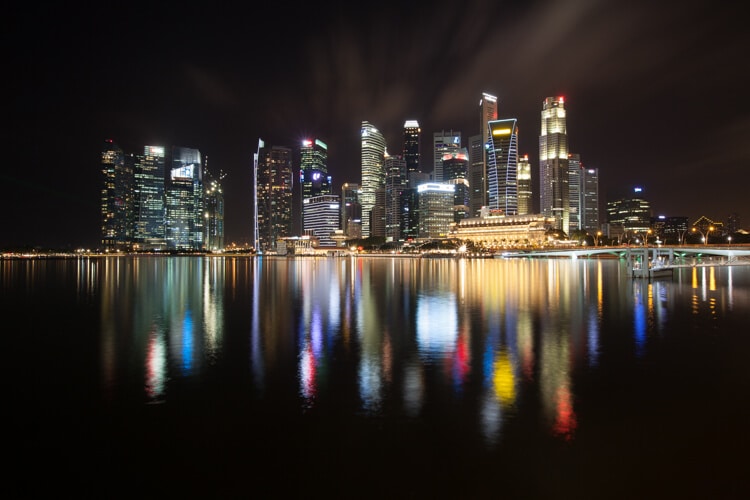 The image above was taken in Av mode, with the default metering mode. Give the ISO and aperture, the calculated exposure time was 30s. The histogram shows mostly shadows and darks (the night sky) with a flat, thick line across the midtones, highlights and brights.

There isn’t much clipping of the highlights. Even if there is, it’s not unfixable. But see what happens when I drag Highlights to the left. 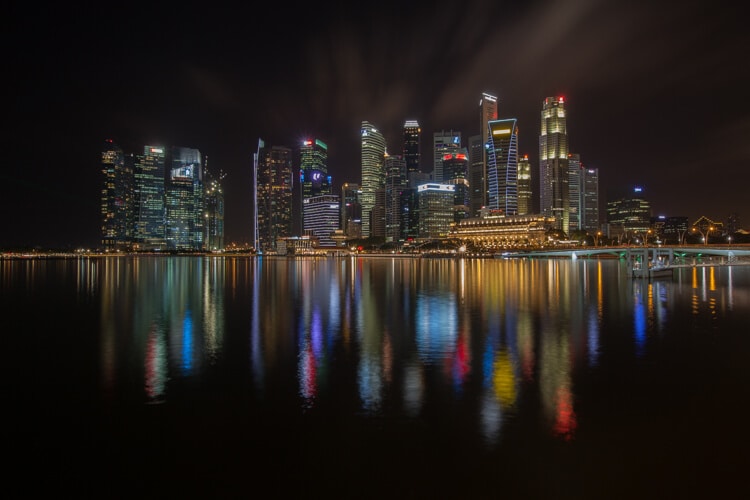 Reducing highlights made the image to lose contrast and becoming flat

The highlights are dimmed but the image has lost contrast and looks flat. You can compensate that with Exposure and Whites but you can never achieve a balance for the image to look appealing.

My way of solving this problem is to bracket exposure until the brightest brights in the image looks well defined on the LCD screen of my camera. This particular scene took six exposures to achieve that. 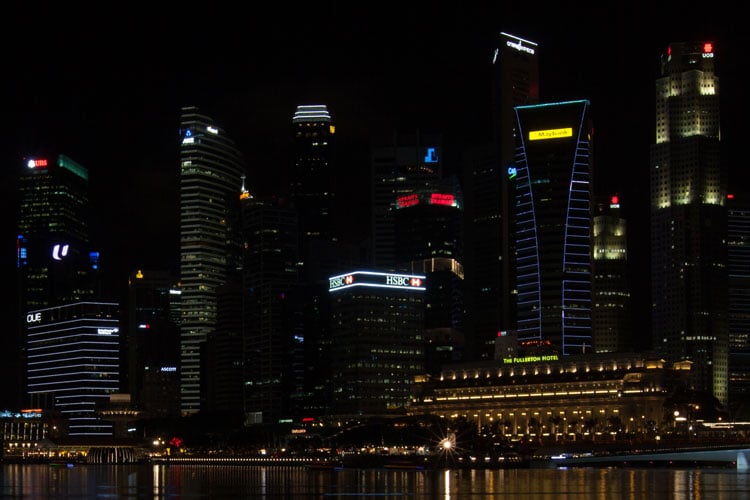 This is different from bracketing exposures during the day where you can rely on histogram to guide you. For cityscape night scene, I find visual inspection of the image on the LCD screen to be the most effective.

Essentially, you want to blend in the darker exposure into the brighter one sequentially, starting from the brightest exposure.

I did this in Photoshop with luminosity mask because it gives me an accurate selection over where I need to blend. I basically chose a bright mask that targets the building lights.

If you're interested, you can learn more about blending exposures in night cityscape in this tutorial. 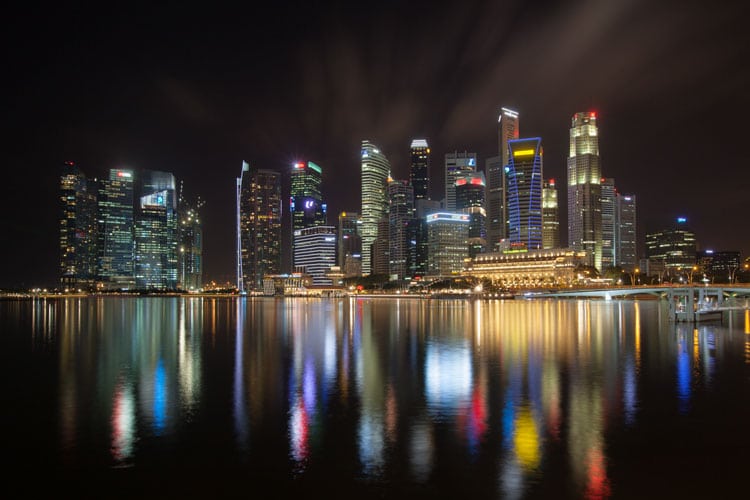 Stylizing the Image of Marina Bay

​​​​​If you’re after a representational image, this is probably where you’ll stop. But that wasn’t what I had in mind.

I wanted to explore creativity more.

My first impression when I saw the cluster of office buildings lit up at night by the waterfront was “wow...that’s an ultra futuristic looking scene!”. I wanted to convey the excitement I had through the image. The first idea I had in mind was the movie Tron.

Don’t ask me why...it was the first thing I could think of.

If you’ve watched the movie, you would noticed the “trademark” of the film, which is the cyan/yellow neon light and buildings that look like they're made of glass or some sort.

I wanted to have that effect in my image. So I started thinking different ways to add cyan to the lights.

After studying the image, I realized the lights were basically highlights (because the building lights are the brightest part of the image) and can be targeted using a bright luminosity mask.

That was when things started to get interesting!

I have previously published a tutorial on how I create the effect on Digital Photography School. If you want to know the post-processing steps, you’re welcome to check out the tutorial here. 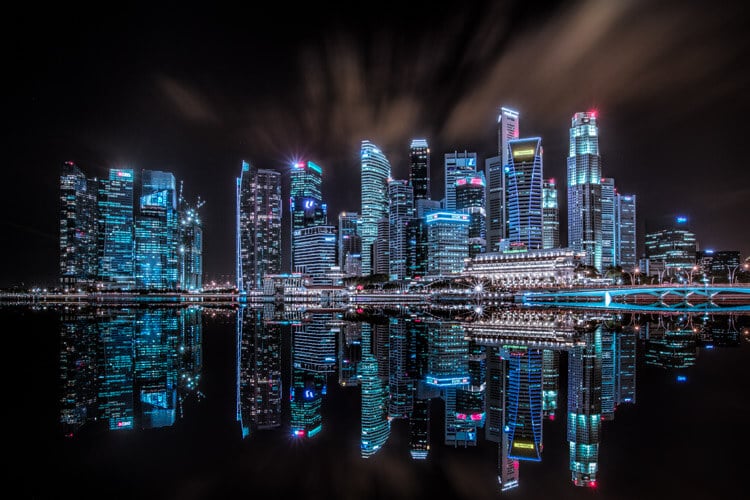 Image Doesn’t Always Have To Be Realistic

Some people are too obsessed with their images being “real”.

I beg to differ.

I think photographs doesn’t always have to be “real”, but it should be “natural”. This is purely my personal opinion and I respect you may disagree.

There are times when a photograph has to be real, e.g. photojournalism, documentary, etc. In other times, you’re allowed to inject a bit of wilderness to spice things up a bit.

Choosing when to do so is a judgement call - you either make or break the image.

Be bold, be experimental, be creative.